How to Pull Off White on White

You’ve heard not to wear white after Labor Day, but what about white on white during the summer? I know, you may have visions of the “no denim on denim” fashion faux pas (although it seems young fashionistas seem to be embracing that trend).

And then there are those of us who fear wearing white whenever going out to a restaurant, much less wearing white around young children or even grandchildren.

But if you want to look cool and crisp this summer, you’ll want to embrace white on white, a la Heidi Klum in the image above.

But this angelic look isn’t just for women; men too are sporting white linen suits with crisp white shirts underneath. The key is to layer different shades and textures 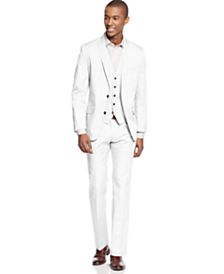 The key is to layer different shades and textures of white fabric to give your outfit depth and character.

So go on – there’s no better time to dress in all white than during the heat and peak of summer, especially when summer fashion is up to 60% off at Macys.com right now.